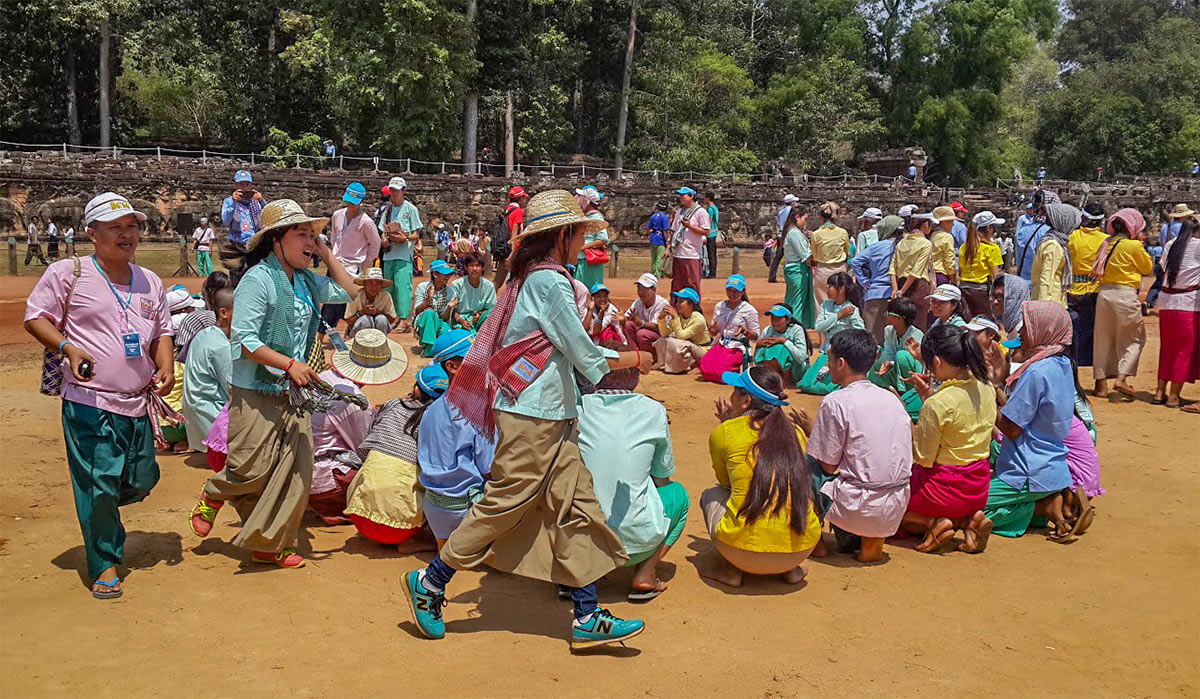 Three days the Cambodians celebrate their Khmer New Year. So a lot of time for exuberant celebrations. While the celebrations in the pagodas begin on the day the angel arrives in the afternoon, preparations for this meaningful Khmer feast have been going on for weeks in Siem Reap. Not only the houses are decorated, but also the streets shine in festive splendour. Garlands, fairy lights as far as the eye can see. And of course pigs, in keeping for the new year.

Since 2013, the Union of Youth Federations of Cambodia (UYFC) has organised Angkor Sangkranta at the Angkor Archaeological Park. With dance performances and games. World records have also been set, such as the biggest sticky rice or Madison Dance with 2,015 participants. According to a report in the Khmer Times, this year the events will take place throughout the country for the first time. It says there will be a Siem Reap Sankranta instead of the Angkor Sankranta. Next year, in 2020, there will be another Angkor Sankranta. And it will be even more beautiful and bigger than before.

In tug-of-war – Teagn Prot – a male and a female team are playing against each other. They show their strengths to each other by pulling the rope. The goal is to pull the rope and the opposing team into their own playing field. Teagn Prot has a number of important stories in Khmer culture, as the following folk tale shows. The hidden meanings reach far into the history of Cambodia.

The giants and angels came together to stir and dry the ocean. It was about preserving the elixir of life so that they could live forever. They used a snake called Vasuki as a rope to move and turn Montakrak Mountain. Vishnu, the mighty god, turned into a turtle to support the mountain. The angels pulled at the head of the snake, while the giants pulled at the tail. While turning, the snake became dizzy, spitting poison and breathing fire through its tongue. This produced rain in the celestial sphere that fell down to earth.

Pulling the rope is therefore similar to pulling the snake and is still considered a rain ceremony today.

A reading tip: Another saga about Teagn Prot can be found at Khmer Chhankitek Calendar.

Angkunh is a tree fruit that is mainly found in the Cambodian regions of Stung Treng and Kratie. The 5 cm nut is flat on both sides and looks a bit like a flat and oversized chestnut. Angkunh is extremely hard and dark brown in colour. In the Angkunh game two teams compete against each other. The two teams face each other and place Angkunh nuts on the floor in front of each other. One of the typical formations consists of 2 rows with a total of 7 nuts. In the back row there are 4 nuts and in the front row there is 1 nut in intervals, so 3 nuts. There are also variants with 5 or only 3 Angkunh nuts. There are different rules for Angkunh, here is one of them.

Negotiations at the beginning of each game

Before the game begins, the parties negotiate:

Once clarified, the game begins and the first player of the starting team throws an Angkunh-nut on the nuts of the opposing team. For each nut hit there is one point and the player gets his nut back for the next throw when it’s his turn again. Each player has one throw until one player of a team does not hit a nut. Then the round goes to the opposing team.

The game continues until the agreed number of points is reached and the winning team is determined. The team wins the right to “gently” beat the bent knee of the loser with the two flat sides of the fruit. The resulting noise causes a lot of amusement among the players. However, if the right tone is not heard, the losers can hit the winner’s knees.

Here’s a video about this game.

This game is particularly popular among young Cambodians, as it offers the opportunity to meet other sex. The game is played with a ball of rolled Krama – the typical Cambodian scarf – with one end of the scarf sticking out.
The two opposing teams each consist of a boys’ and a girls’ team. The game begins when a boy throws the stuff ball into the air. Before the ball touches the ground, the girl team must catch the Krama at its end.

If none of the girls can catch the Krama Ball, all they have to do is pick it up and throw it back into the air for the boys team to catch it. Whenever an opposing team member can catch the ball, they must quickly throw it back and aim at a girl/boy they like.

Boy: I throw the Chhoung and I aim at my lover. Be very careful, my love, that my Chhoung does not touch the ground.

Girl: Throw it to me. And don’t worry. If the Chhoung touches the ground, I will sing for you.

Boy: Here’s the Chhoung, be careful or you’ll even sing twice. Wait a while before you throw the Chhoung back. I see bananas in the south and flowering banana trees. Accompanied by thirty friends, he comes to ask for the young girl’s hand. The father says no, but the mother says yes. She gives him her daughter, and looks forward to the pig heads (the wedding present). I look south and clearly see some coconut palms. Would you please tell the beautiful girl that I shouldn’t take a husband?

Hint for reading: The game Chhoung comes in different variations. Khmer Chhankitek Calendar will tell you all about it.

In this game the players sit in a circle on the floor. One of the players holds a “Kanseng” (Cambodian towel) in his hands, walks around the outside of the circle and sings: “Hide the Kanseng, the cat bites the heel and pulls the leg”.

Meanwhile the player secretly puts the “Kanseng” behind one of the other players on the floor. Together with his neighbor, this player jumps up and pursues him. If the player does not manage to catch up with his neighbour until he has returned to his seat, he runs around the circle himself and puts the towel behind another child from the circle.

According to the description this game doesn’t really come across as being played especially for the Cambodian New Year. But it is mentioned in the English Wikipedia.

The first player takes all beads from one hole and drops them one after the other into the other holes. He or she must repeat this process until he or she has dropped the last bead into a hole next to an empty hole. Then the player must remove all the beads from the hole that follows the empty hole. This continues until the last empty hole is followed by two more empty holes or a full hole.

At the end, the player with the largest number of beads wins.

One of the most popular games during the Cambodian New Year holidays. Thin clay pots with flour and a small price (usually something sweet) are hung on a rope between trees. The aim of the game is to smash one of the pots with a stick while blindfolded. The player follows the direction of the screaming crowd and tries to find the right position to hit the pot. If the player hits the pot, there is first a flour “shower” while the others already collect the sweets from the ground :-)

The rules of the game are very simple, whereas the performance is much more tricky. Using one hand to throw a ball and catch it while the player tries to catch an increasing number of sticks with the other hand, e.g. chopsticks or pens.

Not really a game, but still increasingly popular during the Cambodian New Year holidays: The “Trot” Dance, also called “Robam Trot”. Trot means “the end” and means the end of last year.

The Trot dance and its myths

The dance tells a story, which is based on different folk tales. One of the fairy tales says that Buddha was first a monk before he attained enlightenment. On his way there, the Buddha appeared a golden deer camouflaged devil who blocked his path. Buddha began to pray to an angel. The angel came down and appeared as a hunter to kill the golden stag and accompanied Buddha on his way to become a monk.

The main actor wears a Kangcha, an approximately 2.5 metre long pole, the front part of which is curved. The two ends of the pole are connected by a cord and decorated with the nuts of Angkuhn and metal pieces. Those make noises and set the beat for other instruments.

Hint for reading: You can also find more information about the Trot dance at Khmer Chhankitekt Calendar.

By the way: If you are in Cambodia during the holidays for the Cambodian New Year, then you will surely encounter one or the other water pistol. Well, I’ll say, it’s a modern variation on the rain rituals … :-)

So now you are an expert with playing those games during Khmer New Year. Have fun!