Bayon (Khmer: ប្រាសាទបាយ័ន, Prasat Bayon) was built during the reign of the famous King Jayavarman VII from the late 12th century to early 13th century. Bayon is located in the heart of Angkor Thom capital city. A Buddhist temple, it is the last mountain temple that was built in the style of Khmer Arts and consecrated to this religion. The Bayon Temple is one of the most famous after Angkor Wat, and millions of tourists come each year to see it. 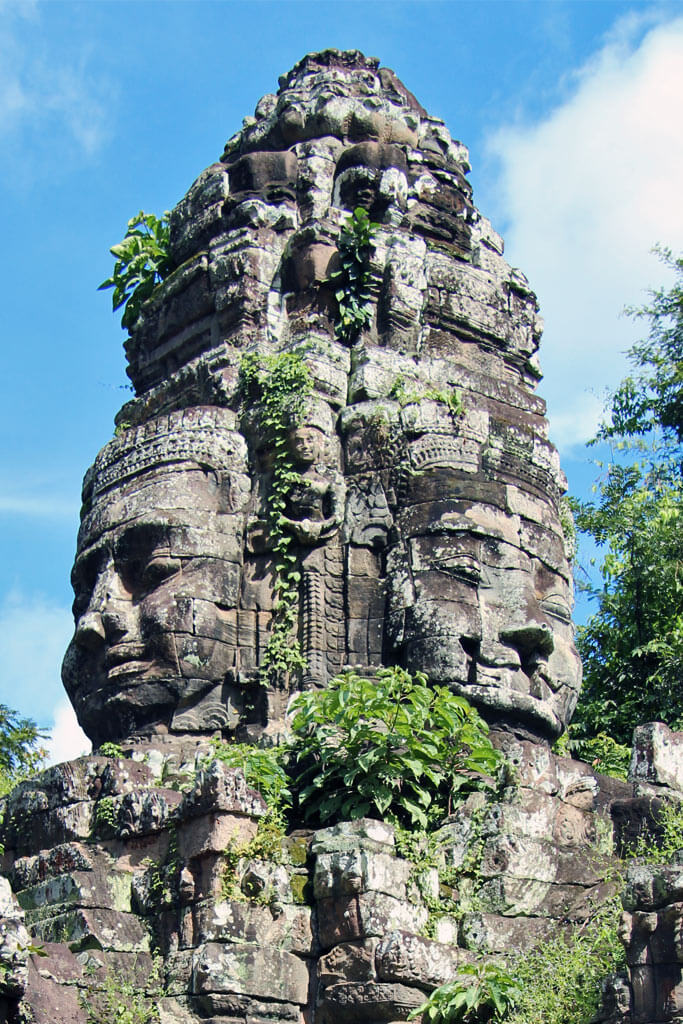 The Bayon was built nearly 100 years after Angkor Wat. While its basic and earliest structure of the temple are unknown, it is clear that Bayon temple was built on the top of another older monument and that it was not built during a single construction period. The Bayon temple consists of 54 towers which represent the Khmer Empire Period (Angkor period). The main tower is located in the center and called “the Gold Tower” showing four faces. The iconography of the four faces represent the Bodhisattva Avalokiteshvara – Lokeshvara – and they are generally believed to to be the four faces of King Jayavarman VII demonstrating the omnipresence of the king. The faces also symbolize the four smiling faces which are the charming smile, sad smile, glad smile and beautiful smile. In total we have about 200 different faces in our culture.

11.000 carved figures on the outer gallery of the Bayon Temple

The main temple mountain of the Bayon Temple is surrounded by two galleries holding an extraordinary collection of bas-relief scenes of legendary and historical events. On a length of about 1.2 km, on the outer wall of the outer gallery there are more than 11.000 carved figures. Most of the carvings on the walls of the Bayon temple talk about the battle between Khmer and Champa, Cambodian daily life and legends.

The surrounding gallery is opened up by five gates on the axis of the Bayon. The surrounding wall was used as a rampart to protect the capital city from enemies. All the gates are decorated with Bodhisattva Avalokiteshvara’s head as well as the sculpture of Churning of the milk ocean.

The reign of Jayavarman over Angkor Thom is known as one of the most splendid in South-East Asia. Throughout his sovereignty, many of the temples were built demonstrating his power. However, after his death the Angkor Thom Kingdom lost its glory and power and so it happened, that the Angkor Kingdom got weak and eventually was abandoned. For a very long time after the fall of the kingdom, it was left forgotten and hidden in the jungle until french archaeologist rediscovered it.

When I visit the Bayon Temple, I can still feel the splendor and magic coming from this place and the people who were able to construct all these amazing temples in the Angkor Kingdom. For me personally, it is the greatest and most amazing architecture in the world. If you have the chance, you should come and visit Angkor some day. :)