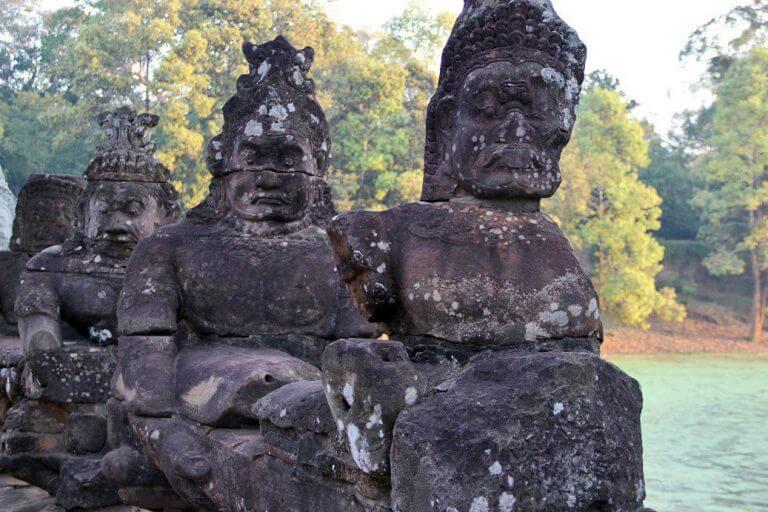 Do you know why the Solar and Lunar eclipses exist? Well, you might say you do, but I can tell that you will tell me the scientific fact, and I know that you are right, but have you ever asked yourself a question how did people elaborate these events before the advancement of technology or did they just ignore? Well, in Cambodia we were able to elaborate the Solar and Lunar eclipses a long time before the advancement of technology.

You might  ask  me how, but as you know that Cambodia is a country packed with legends and mythologies,  you probably get a lead now. Well, have you ever read about a mythology called Churning the Ocean or Milk? In the last part of this legend says:

Vishnu, the arbitrator did not want the Asuras to become immortal

After many effective things had emerged, the water of immortality finally came out at the Asuras side. Vishnu who was the arbitrator was not really fair. He thought if the Asuras got the immortality, the world would not be a safe place for  his people, so he transformed himself to be a beautiful girl dancing in front of the Asuras. As you know what all men would do when they saw such as beautiful girl dancing in front of them- they would watch without blinking so would the Asuras. All Asuras watched without blinking except Rahu.

When the Asuras were enjoying contemplating the dancing girl, Vishnu took the water of the immortality from the Asuras side to the Devas side and then gave them a drink. Unfortunately, Rahu who wasn’t fascinated by the girl disguise himself to be one of the god and stood in the front of the other. Vishnu didn’t know, so he gave Rahu some of the water of immortality. But when he was giving Rahu thedrink, the moon and the sun informed him, that the one he was giving a drink to was not one of the god, he was Rahu, one of the Asuras. Vishnu was so angry that he threw his circle to behead Rahu, but Rahu’s head was not dead because the water of immortality was in his mouth. But his body was dead. Because of this, Rahu became so angry with the moon and sun that he always traps them to take revenge.

He will always swallow them whenever he encounters them, because only his head remains he cannot east them. Rahu has no stomach to store them. So that’s why the moon and the sun usually disappear for a short time in which we call a Solar eclipses and a Lunar eclipse.