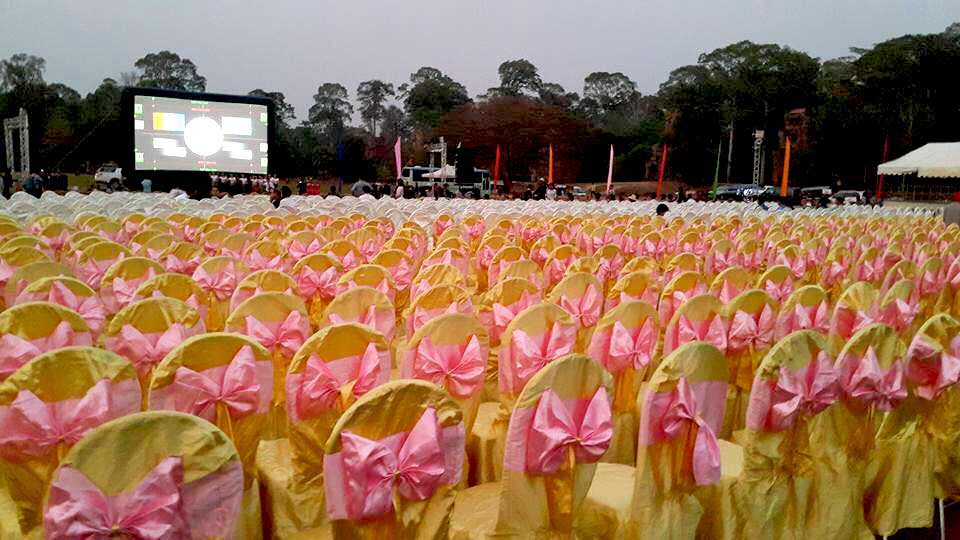 On 18 February 2017 came a very special day in Siem Reap, the small vibrant city to the south of the Temple of Angkor in Cambodia. Many people may already know that last year Angelina Jolie directed the documentary feature film “First They Killed My Father” about the terror of the Khmer Rouge. Angelina is the woman who flickered across our screens in front of the Angkor scenery as Lara Croft in the filming of the computer game Tomb Raider. At that time, hardly anyone would have thought that Angelina Jolie would work on the story of Cambodia a few years later in her own production. Nevertheless, this year the premiere of her film “First They Killed My Father” took place in Siem Reap.

Staged freely on the grounds in front of the elephant terrace

The premiere of “First They Killed My Father” took place on a large scale at the front of the elephant terrace of the Angkor Park. When it came to picking a venue, there could be no better place for this event. As far back as the 12th century as the Angkor empire bloomed, the famous King Jayavarman VII watched the games and parades at this exact location.

The role was hard for me. Actually, I did not want to see or hear about stories from the past. But we must remember, we must not forget the regime of the Khmer Rouge.

And on this day those games were in the form of a film on an emotive subject – what a historic moment in a historical place. In the photo at the top of the page you can see the screen and the chairs decorated for the premiere.

The story of “First They Killed My Father”

The film “First They Killed My Father” is based on the autobiography of Cambodian human rights activist Loung Ung. She was only five years old when the Khmer Rouge invaded Phnom Penh. She was still to experience the coming years and all their horrors. Separated from her siblings, she was educated as a child soldier in a children’s home. In 1980 she managed to escape to Thailand on a boat with her older brother Meng and his wife. There they spent five months in a refugee camp before relocating to Vermont in the USA.

A gift for Cambodia

Hundreds of survivors and their children came together in Siem Reap to recreate their own story for the movie “First They Killed My Father”. The war, told from the perspective of a child, yet at the same time very much the story of Cambodia. It was the first time that such a thing had happened; that in such a way the past of Cambodia, during the time of the Khmer Rouge regime, had been talked about.

I’ve tried to make a film that is not just about policies, politics, or war. It is a film that is at its core about the people in Cambodia and their families. A film about love and survival. I hope that the Cambodians will feel a sense of pride when they see in the film, about what they have survived and who they really are.

Loung Ung wrote the screenplay for the film in collaboration with Angelina Jolie. For Loung Ung, what Angelina has done with “First they killed my Father” is a great gift. A film for her country, played only by Cambodian actors and in the original Khmer language. There will be no dubbing, just subtitles. Another gift to the Cambodians, around 50 local people from each village received an invitation to the premiere. Before “First They Killed My Father” will be shown at Netflix in autumn 2017, there will be two more screenings at the Olympic Stadium in Phnom Penh and in Battambang. Here are the details:

The film was produced by the film maker, Rithy Panh. He too experienced the terror of the Khmer Rouge. He escaped and graduated from the prestigious Paris film school École Nationale Supérieure des métiers de l’image et du son. Since then all his works have dealt with the aftermath of the regime under the Khmer Rouge in Cambodia.

We need to talk in order to mourn. Talk is the opportunity to work on something and redefine ourselves. To tell a story means to grieve and consider the future at the same time.at the same time mourning and looking into the future. This movie is much more than just a movie. What we are trying to build is a kind of bridge between our past and the future. Between those who have departed, the survivors and the coming generations.

It was certainly not easy to watch this movie, it was hard but also important. Angelina Jolie was in Siem Reap for two days. And, of course, she attended the premiere in person.