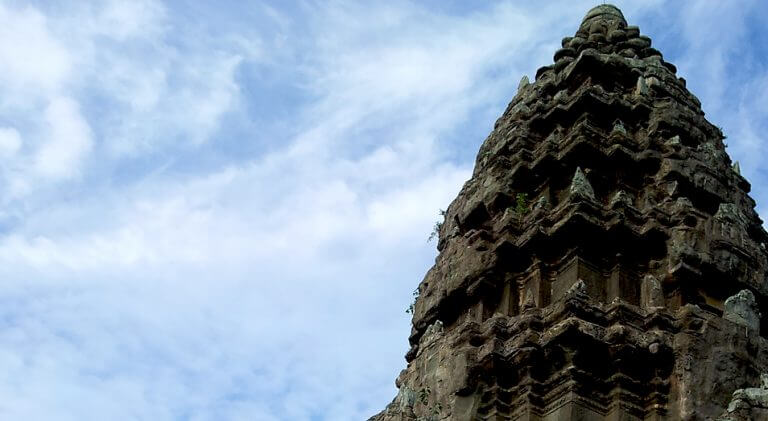 All Cambodians are proud of Angkor Wat, the world’s largest religious building.It’s been the national flag for well over a century. It draws millions of visitors to Cambodia. Today’s question:

“Why was Angkor Wat built?”

Today, many people refer to “Angkor Wat” as the complex of about a hundred temples covering a huge area of countryside near Siem Reap. But “Angkor Wat” really means thr five-towered temple, which dominates all the others around it. From the 9th century onwards, various Khmer Kings built their temples, palaces and cities close together. They choose Siem Reap because it’s land is fertile, easily defendable and with access to the world by the nearby Tonle Sap lake and river. But town planning wasn’t top of their list. The Kings wanted their temples to demonstrate the Khmer empire’s power – to impress their subjects, allies and enemies. They believed the best was to impress was erecting huge carved buildings. They employed armies of laborers and craftsmen, some of them slaves.  Millions of tons of stone were dragged from quarries 40 kilometers away! In the first half of the 11th century, King Suryavarman started to build Angkor Wat itself, the most massive temple of all. In ancient times, a King was seen as a link between the gods and the people.

So, by building temples and performing sacred ceremonies inside them, the rulers tried to guarantee a land with plentiful harvests, freedom from disease, drought and invasions. But die you know that ordinary people lived their ordinary lives within the temple-cities too?  The thousands of carvings on the walls as well as showing Hindu legends show everyday- activities like fishing, cock-fighting, climbing trees and wrestling. Not so different from any Cambodia city or town today!