In autumn of 2015, I was lucky enough to be able to experience the Pchum Ben Fest up close. But what do the Cambodians really celebrate with Pchum Ben? I’ll tell you about it in this article.

Pchum Ben (Khmer: បុណ្យភ្ជុំបិណ្ឌ, also known as “Ancestors’ Day”, “Festival of the Dead” or “Hungry Ghosts Festival”, is a 15-day Cambodian religious festival that culminates in the Khmer calendar on the 15th day of the tenth month and marks the end of Buddhist Lent.  The Cambodians commemorate up to seven generations of their ancestors.

The Pchum Ben festival begins on the first day of the waning moon in the month of Putrobut. The first 14 days of the festival are called Kan Ban (observing festival). Pchum Ben on the 15th day is the beginning of a three-day official holiday in Cambodia. According to our Gregorian calendar, the time of Pchum Ben changes from year to year.

The history of Pchum Ben

In the Khmer language,”Pchum” stands for “gather” and “Ben” is a ball of food, for example rice or meat. Sometimes also called “Brochum Ben”. The festival is one of the most important festivities in the religious calendar of the Khmer people and the whole country is on its feet because everyone wants to visit their families. It is common for some of the restaurants in Siem Reap and elsewhere in Cambodia to close, so that the Cambodians have time to be with their families at Pchum Ben.

The Pchum Ben festival dates back to the Angkorian period, when people still followed animism. They believed that objects, natural phenomena and even the universe have their own soul. Finally, Animism was replaced by Buddhism as the leading religion. Since Buddhism and Animism also emphasize respect for the deceased ancestors, the old customs under the new religion have remained until today. 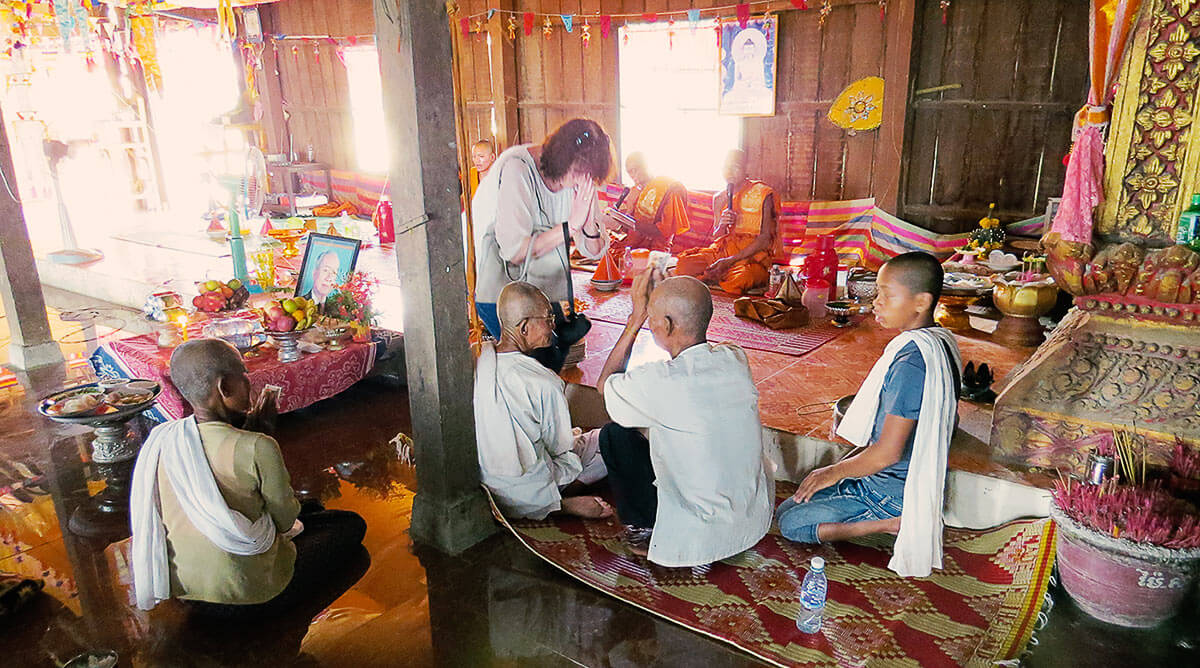 In the past, Buddhist monks had to walk everywhere to ask for alms, no matter how bad the weather was. Later, during his reign, King Jayavarman VII (1181-1218) provided the monks with clothing, food, shelter and medicine. The king was a strong advocate of Buddhism and he realized that the monks met heavy rain, thunderstorms, lightning and winds and fell down on the muddy paths again and again. Thus, King Jayavarman VII appealed to his people to offer the monks food and other basic necessities for daily life during this time. In addition, Buddhist followers explained that it is a personal advantage to offer alms to the monks.

Because of the King’s request, more and more people offered alms to the monks. This trend led to the emergence of a new Bible about the Pchum Ben Festival. The Bible says that there was a mighty old monk who was able to visit the blazing hell. When he visited hell, an open lotus appeared on his way – as big as a wooden wheel of a Cambodian oxcart. The monk could fly through hell without ever being burnined by the flames. The figures of the dead were very impressed by his visit and greeted him warmly and the monk preached to them. Before returning, the creatures asked him to inform their living relatives about the fact that they were suffering from hellish fire, hunger and disease. Living relatives should give alms to the monks to free them from their suffering. On his return, the old monk delivered the message to the King. Jayavarman VII ordered that all people celebrate Kan Ban to commemorate the merits of a deceased relative.

The scriptures about Pchum Ben are complex and confusing at first glance. But, all in all, they are similar in content. The first scripture refers to five Buddhas negotiating with hungry ghosts. In the second scripture, by Pet Vuto (the governor of the monks), the king’s servants and soldiers had to wage war. At night, they met thungry ghosts on their ship. The servants and soldiers asked,”How can we bring you food?” and the ghosts said,”You can offer food to the man among you who has five moral conducts or eight moral conducts, and at the same time call on our names.” The third and fourth scriptures say that in the first 15 days of Pheakta Both, the heaviest rainy season, the devil liberates the ghosts so that they can find their relatives in order to get food.

Members of the King’s family are guilty

But Cambodia would not be Cambodia if there weren’t more legends about the Pchum Ben festival. As stated on the official website of the Cambodian Ministry of Tourism, for instance, Om Sam Ol, a monk of Steung Meancheay Pagoda in Phnom Penh, tells us that during a religious festival members of King Bath Pempeksa defied religious customs and ate rice before the monks did. After their death, all her relatives became evil spirits. Later, a monk named Kokak Sonthor attained enlightenment and became a Buddha on earth. The spirits asked him,”When can we eat?” The Buddha replied,”You must wait for the next Buddha in the Buddhist kingdom of Kathakot. In this realm, evil spirits can’t eat. With Kamanou and Kasakbour two more monks attained enlightenment and became Buddha and the hungry spirits asked them the same question—”When can we eat?”. And Buddha told them the same thing every time: They should wait for the next Buddha.

The last Buddha, Preah Samphot – also known as Samanakkodom – finally said to the evil spirits:”Wait for King Bath Pempeksa, whose relatives you are and stay with his offerings. When the ceremony is over, you can eat.”

King Bath Pempeksa made a gift, but he did not dedicate the sacrifice to the spirits of his relatives. The ghosts cried all night long. And when Bath Pempeska went to the Valovan pagoda to visit Buddha, he said to him,”The spirits of your relatives are crying because they should have food in the kingdom of Kathakot. So Bath Pempeksa made another offering, and this time he dedicated the food and the good deeds to his relatives, the evil spirits. The evil spirits received the widowhood and were finally reborn in Paradise.

During the first 14 days of Kan Ban, the Khmer people give food to the monks, light candles and donate money. They do this in the hope that their gifts will lead to the alleviation of the sins of their ancestors. Since the Cambodians do not know whether their gifts help their ancestors to be better, this ritual happens every year. At least once during Pchum Ben they go into a local pagoda to present their gifts for the ancestors. Very religious Buddhists visit seven different pagodas. The Khmer believe that the spirits look around in seven pagodas and if they cannot find the sacrifice of their living relatives in any of these pagodas, they will curse them. The reason for this is that the spirits cannot eat food offered by other people. However, when the spirits find the food of their living relatives, they will bless their relatives with happiness. On the days of the Pchum Ben festivities, Buddhist monks rejoice in the food offerings. The festival usually takes place during particularly heavy rains in the rainy season. The rains and ancient rites make it difficult for monks to leave their pagodas and receive alms from the locals. Because during Kan Ban it is now the task of the monks to recite protective prayers during the nights. Cambodian artists play traditional music such as Yike or Lakhon Basak.

The dishes are usually “Bay Ben”. These are balls of sticky rice and sesame seeds. Sometimes the rice is seasoned with coconut crème to make it more delicious. The meals are served mainly at dawn because the Khmer believe that ghosts cannot take in food during the day because of their grave sins. The Cambodians also believe that the ghosts have only tiny mouths to eat.

Many ceremonies consist of processions around temples and pagodas. Crowds of people wait outside with lighted incense sticks in their hands while monks perform rituals inside. There are also symbolic events with five formed and decorated piles of sand or rice. They point to Mount Meru, the place where Buddhist gods are thought to live. The rice piles are an effect of the gifts of the believing Cambodians. Five empty bowls are available on a long table. In each of these bowls, the Cambodians put some of the rice they brought with them. At the beginning of this table, a tower of bowls with flower arrangements symbolizes the mountain Meru. There, the Khmer people fix the money they brought with them as victims. Even if they have little money, there’s something to give. For example 100 riel, which equals about 2.5 cents.

Here on the photo, you can see the five bowls for the gifts and at the very top of the picture you can see mountain Meru with fixed money. Most are smaller pagodas in which there are “only” these five bowls. In larger pagodas, there are many more. For example, I took part in a ceremony with 20 bowls on a long table. The amount of rice that went into the bowls there was huge.

At Pchum Ben itself, the main day of the celebrations, the Khmer people are once again donating special alms. Especially in rural areas, believers throw their rice balls into the air or onto the fields. According to their faith, the spirits can take food from the spiritual part of the food. The earthly part falls to the ground and can be eaten by the monks.

Mieh Ponn, a consultant at a Buddhist institute, says that Bay Ben (the rice) should be placed on a plate rather than thrown on the floor. Giving rice to the poor can be more deserving of the living than giving rice to ants only. [Source: Phnom Penh Post]

How to participate in the festivities of Pchum Ben

If you want to know how to participate in the festivities, the best way to find out is to check with your hotel or travel agency. But the very best thing you can do is to have Cambodian friends and they will take you to a pagoda. Important: Be sure to wear appropriate clothing (covered shoulders and knees). You can also earn extra points if you dress up a bit more festively. A white shirt or white blouse is enough. This is especially good in the large and well-attended pagodas. Find out more about Pchum Ben in my article Pchum Ben in Cambodia  – my Experiences.

Tell me about your experiences with Pchum Ben, I’m looking forward to it!